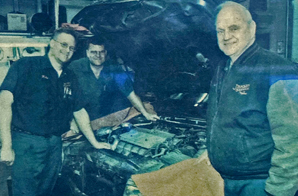 Jensen Service and Diagnostic has evolved from a small mechanic shop of the 1950's to a full-scale service and diagnostic center, handling most automotive issues excluding paint and bodywork.
Mike Jensen, who owns the business with his brother Dave, said that the shop has been successful because employees leave everything up to the customer to make an educated decision.
"We're as busy as we are - servicing an average of 20 vehicles a day - because we're honest with the customer," he said. "Dave, Roger Manley and I are certified drivability technicians, and the customer always talks to one of us."
"Customers don't have to deal with a secretary or service writer. If customers are educated by us, then maybe they can spot a problem before it happens. Customers are our family and we treat them accordingly."
This means knowing customers, if not by their first and last names, then definitely by their car.
"I know about all of the customers on a first and last name basis," Jensen said. "The others I can match the car to their face."
"A lot of what you do in the automotive service industry is a result of how the customer feels. You could have the best technicians, but if customers don't feel good about the experience and how they were treated it doesn't matter."
Jensen said that Jensen Service and Diagnostic tells a customer exactly what is wrong and give a free estimate before any work is done.
"Our estimates include tax and are less than $10 off on a bill for work under $1000," he said. "There's no guesswork or sticker shock for customers, because they know what the cost will be before they get back to the shop."
"If we find four or five other problems while doing an oil change, we'll inform the customer and rate the items on importance. We include prices, and this enables a customer to know what the projected damage is as well as what needs to be fixed first."
"The industry has such a bad reputation that if you're straight up with the customers they really appreciate it. They tend to act on most repairs if you build up an honest rapport with them."
The family-owned shop has three other technicians besides Mike and Dave Jensen. Their father, Jack Jensen, is still employed by the company he stated, towing in cars and doing minor repairs. His wife, Fran, does the shop's bookkeeping.
"I've been doing this since I was 14, so I enjoy the job because I'm good at it," Mike Jensen said. "Dave and I are very picky about our own vehicles, so we feel the same what about customers' cars."
"You'll never find two brothers more particular about vehicles and maintenance. We can tell a customer if another service department has botched a repair or didn't revel a problem until the warranty was expired, simply because we have been doing this for so long. If customers aren't informed, they won't know what to look for and can be under the false assumption that a service department is looking out for their best interests."
Jensen Service and Diagnostic has been in business since 1956 when brothers Jack and Bob Jensen opened a shop at 72nd and Blondo. They purchased the lot at 120th Street in 1966 and moved the business. A third brother, Roy, joined the business in 1966.
The three brothers purchased a location on 132nd Street in 1970 and kept it until Bob and Roy Jensen retired. Jack Jensen then sold the business on 132nd Street and kept operating the 1307 S. 120th St. location until his sons decided to purchase it from him.
Mike Jensen received a bachelor's degree from St. Johns University in Minnesota. Dave Jensen played football for the Huskers while earning a degree from the University of Nebraska at Lincoln.
The brothers also went to Southeast Community College in Milford to receive automobile repair degrees, They came to work full time at the shop in 1993, ran the business for two years under the close watch of their father and purchased it in 1995.

What Our Customers Are Saying

Had a heater problem. Explained the problems I was having. Diagnosis was done verbally. The parts were ordered and onsite before I had the vehicle there that morning. Same day service. Excellent customer service. Recommend them with highest quality and affordable service. Well done.

I took my truck to Jensen because my truck wouldn't start so I got it towed there. These guys are super respectful and honest. The inertia switch was tripped for the fuel pump. 250 bucks later back on the road, very pleased.

First time customer. Recently had a couple issues with my 2006 Silverado. I had an idea of what the issues where. Roger and me talked about it a bit. The techs put it on the rack and did pressure tests for the other issues. They fixed them. Didn't just throw parts at the issue. No crazy diagnostic fees. Straight forward, good service. I'll be back.

Everyone there was extremely helpful. The pricing was fair and clearly explained.

Phenomenal. We were traveling through Omaha when our alternator went out on our Suburban. The owners Mike amd Dave went out of their way to provide same day emergency service and even went the extra mile proving a ride back to my hotel. As a business owner myself, I know how difficult it can be to provide excellence and these guys nailed it.

I just can't say enough good things about Dave and Mike Jensen and their amazing team. A true generational family business with decades of experience (and we've been taking our cars there for a couple of those decades!), these guys are always honest and incredibly thorough. On one occasion, they researched the repair they were doing on my Buick and discovered an old service alert that meant I could possibly get reimbursed for some of the repair. They helped me submit the paperwork and remained available throughout the process until my refund was successfully processed. They didn't have to do that, I already paid them. But that's the kind of personal service and attentiveness you get from them. Highly recommend!